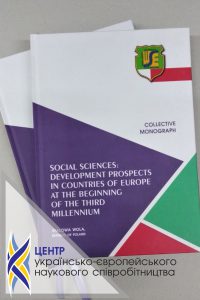 University of Economics in Stalowa Wola (Wyższa Szkoła Ekonomiczna w Stalowej Woli) in collaboration with the Center for Ukrainian and European Scientific Cooperation elaborated a collective monograph “Social sciences: perspectives for the development in European countries at the beginning of the third millennium” authors of which were scientists from Ukraine. Activities on monograph’s formation began in October 2018.

In order to prepare papers for publishing, authors were proposed the following area of research:
• Social sciences in theory and practice;
• New searches in the sphere of general history, anthropology, ethnography;
• Methodology of political science;
• Modern view of social institutions and processes;
• Topical issues of international relations and foreign policy;
• Philosophy and Religious Studies.

The collective monograph is composed of nine individual articles prepared both by authors personally and in co-authorship. Each of the authors will receive three copies of the publication and a certificate of participation in collective activities.

Avdieieva Olena Serhiivna, Candidate of Historical Sciences, Senior Lecturer at the Department of History and Philosophy of Faculty of Humanities and Economics of Berdyansk State Pedagogical University, wrote the article “Missionary activity of the Orthodox Church in the Northern Azov (the end of the 18th – the beginning of the 20th century)”, which was devoted to the study of history of the missionary activity of the Orthodox Church on the Northern Azov in the late 18th and early 20th centuries. The author analyzed the general tendencies of the religious policy of the Russian Empire and their influence on the formation of a religious map of the Northern Azov. 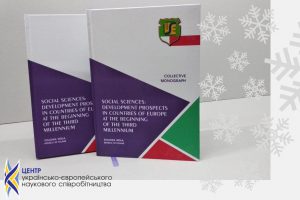 Muliar Volodymyr Illich, Doctor of Philosophical Sciences, Professor, Head of the Department of Humanities and Social Sciences of Zhytomyr State Technological University, submitted the article “Harmony problems in Ancient Greek philosophy” for publication in the collective monograph. The article deals with harmony phenomenon which since ancient times of European history was one of the problems focusing on the search a of basis for all things existent, universal and definitive reasons for infinite being. The author analysed viewpoints of outstanding representatives of Ancient Greek philosophy who not only directly used the term “harmony” but also conceptually talked about it. Pythagoras, Heraclitus, Plato, Aristotle are among them.

Shediakov Volodymyr Yevhenovych, Doctor of Sociological Sciences, Candidate of Sciences in Economics, Independent Researcher, elaborated the article “Social level of information influence: strategic culture and management compositions” for monograph’s publication. The author considered the social level of information communications as the study object and correlation of objective and subjective parameters of their transformation as the subject.

Each author made a significant contribution not only to the scientific publication but also to science in general. We wish all authors to continue conducting their research activities, and we, for our part, will assist you with it!