Головна News Collective monograph was published under the aegis of David Aghmashenebeli University of...

Collective monograph “Theoretical and practical mechanisms of development of legal science at the beginning of the third millennium” was published under the aegis of David Aghmashenebeli University of Georgia as a result of authors’ joint cooperation.

Collective monograph came out with the support of the Center for Ukrainian and European Scientific Cooperation which extensively cooperates with educational and scientific establishments of Europe. 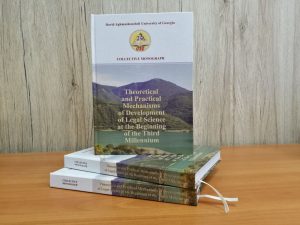 David Aghmashenebeli University of Georgia was established in 1992. The university provides Bachelor’s, Master’s and Doctoral programmes according to the ECTS (European System of Credits and Transfers).

The monograph includes the findings of lecturers and postgraduate students, practitioners in various branches of law, in particular, administrative, civil, constitutional, and criminal, etc. More than 20 authors from Ukraine also participated in the elaboration of scientific content.

Hloviuk I. V., Doctor of Juridical Sciences, Associate Professor, and Mohyla V. S., young scholar, added a solid paper “Drafting, reviewing and solving investigator’s request for examination of residential space or other property of a person: theory, practice, prospects of improvement” to the collective monograph.

Ivanova R. Yu., Candidate of Juridical Sciences, Senior Lecturer at the Department of International and European of Khmelnytsky University of Management and Law, dealt with a topical issue for consideration. The research is devoted to the legal regulation of international currency relations through the prism of international organisations.

Special attention deserves the paper “The administrative-territorial structure as a constitutional and legal basis of the organization of local public authority in Ukraine” whose authors are Kalynovskyi B. V., Doctor of Juridical Sciences, Associate Professor, and Kulyk T. O., Candidate of Juridical Sciences (National Academy of Internal Affairs). 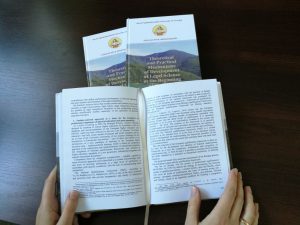 Ozerskyi I. V., honoured scholar, Doctor of Juridical Sciences, Professor, presented the paper “The application of mediation procedure in jurisdictional process” to the academic community.

The research of the representatives of the National Technical University “Dnipro Polytechnic” holds pride of place in the collective monograph, in particular of Khriapinskyi P. V., Doctor of Juridical Sciences, Professor, Honoured Worker of Science and Technology of Ukraine and Svitlychnyi O. O., Candidate of Juridical Sciences, Associate Professor. The paper deals with history of counteracting individual sexual crimes against children and adolescents in Ukraine.

The research “The improvement of the offences against the family and children, social orphanhood and domestic violence prevention system” of Chekhovska I. V., Candidate of Juridical Sciences, Senior Scientific Associate, and Kovalova D. K., Master’s Student (National University of the State Fiscal Service of Ukraine) is devoted to the dynamics of delinquency, cases of family violence, breach of protective measures for ensuring or non-compliance with correctional programmes.

Each author, who participated in elaborating collective monograph, received a certificate of participation as well as 3 monograph copies (hardcover, A5 ).

We congratulate Ukrainian scholars who honourably presented their papers in the collective research published
in the European publishing house.