Головна News Director of the CUESC Dmytro Bielov visited a round table “Standards of... 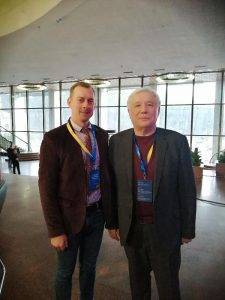 On December 11, 2019, a round table “Standards of blockchain instruments” organized by the Research Center for Legal Decisions on the Application of Blockchain Technology was held in the International Congress Centre “Ukrainian House”. The representatives of the Center for Ukrainian and European Scientific Cooperation Dmytro Bielov and Iryna Aristova also visited the event.

The round table was conducted with the support of the National Academy of Legal Sciences of Ukraine, a non-governmental organisation “Research Center for Legal Decisions on the Application of Blockchain Technology” and company “Simcord”. The representatives of Yaroslav Mudryi National Law University Mykola Kucheriavenko and Yevhen Smychok, as well as Director General of “Simcord”, were the moderators of the round table.

At the meeting, it was discussed the key principles of the functioning of blockchain technology, legal nature of blockchain token and its regulation and the challenges of the available approaches to the determination of prime tools of blockchain and their influence on the formation of the statutory base. Moreover, the participants defined the next steps to elaborate and implement new legislative initiatives and regulatory documents for the development of information resources, goods and services based on blockchain technology in Ukraine.

More detailed information about the event, participants and topics discussed are available at the link: https://www.blockchainukraine.org.

At the end of the round table “Standards of blockchain instruments”, a final protocol, which consolidated the decisions on the implementation of blockchain technology in Ukraine, was singed.

The Center expresses gratitude to Aristova Iryna Vasylivna, Doctor of Law, Professor, for the assistance in the participation of the Center for Ukrainian and European Scientific Cooperation in the event.

A lecture on particularities of assessing...