Головна News Hungarian University of Miskolc is among international partners of the Center for... 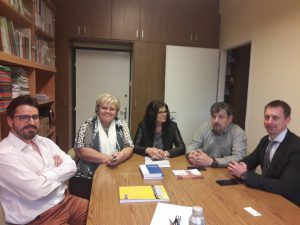 On October 18, 2018, Dmytro Bielov, Director of the Center for Ukrainian and European Scientific Cooperation, met with representatives of the University of Miskolc (Hungary) in the context of bridge building with new international partners. During the discussion of the lines of future cooperation, it was mainly about the international scientific activities aimed at developing legal science within the territories of neighboring countries (Ukraine and Hungary).

The result of the meeting was identification of joint plans by the end of 2018 – the beginning of 2019. So, in the near future, it is planned to establish Hungarian legal journal with the possibility for Ukrainian scholars to be published in. It will enable domestic scholars to publish their scientific academic papers in the international journal of European level. In November-December of the current year, it is planned to hold a joint international law conference for Hungarian and Ukrainian scholars. 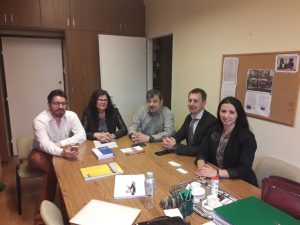 In the beginning of 2019, it is planned to embark upon preparation of a collective monograph for scholars-lawyers that will be published by Hungarian University of Miskolc with support of the Center for Ukrainian and European Scientific Cooperation. Participation in the elaboration of monograph will be an interesting experience for Ukrainian scholars. Early next year it is planned to hold full-time internship in legal sciences. Scientists and legal scholars from Ukraine will be able to visit Hungary, get acquainted with the history of the University of Miskolc and complete the internship in a European country.

You can find detailed information on arrangements for the above scientific events on our website in the section “Announcement”.