Головна News In the context of cooperation, a meeting of representatives of China Renmin... 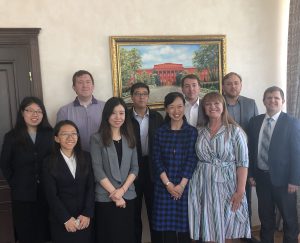 On May 19, 2019, meeting of the Executive Board of Taras Shevchenko National University of Kyiv represented by Oleksandr Dmytrovych Rozhko, Doctor of Sciences (Economics), Professor, Vice Rector for Academic Affairs, Oleh Oleksandrovych Hubanov, PhD in Law, Associate Professor, Head of the Department for Development Strategies Implementation, Tamara Oleksiivna Hubonova, Doctor of Law, Associate Professor, Director of Finances and Law College, with the representatives of China Renmin University Press (CRUP), the largest university press in China took place. On the part of the Chinese delegation, the Press was represented by Yolanda Liu, Director and Liu Zhi, Senior Editor. The Center for Ukrainian and European Scientific Cooperation was a chief organizer of the meeting, in the context of cooperation with Taras Shevchenko National University of Kyiv and Finances and Law College.

China Renmin University Press was established in 1955, which was the first university press since the foundation of People’s Republic of China. As China’s most important publishing house base of the textbooks and academic works, CRUP has been following the idea of publishing outstanding academic books and textbooks and fostering talents in humanities and social sciences. It has published over 26.000 kinds of outstanding textbooks and academic works with cultural communication and accumulation value through 60 years’ untiringly hard work. Since the 21st century, CRUP has been granted over 500 awards of provincial and national level, which makes it one of China’s publishing house awarded with the most national rewards.

As a large-sized comprehensive publisher providing books, audio and video products, electronic and internet services and digital publications, CRUP has become the No. brand in humanities and social sciences’ publishing. For years, CRUP has committed itself in building an international platform of cultural exchanges, which actively promotes Sino-foreign academic and cultural communication. With its brand of high-end outstanding academic works, CRUP has exported around 2,500 copyrights with more than 30 languages versions and collaborated with hundreds of publishing houses in over 40 nations and regions.

Within the framework of the meeting, during a fruitful discussion of different spheres of scientific and publishing activity of both countries, the parties reached a deal. It was agreed to get work on translations into Chinese and publication of outstanding scientific papers and textbooks of the Taras Shevchenko National University of Kyiv in China Renmin University Press (CRUP). The translation and publication of books will be carried out at the expense of the Chinese Press. In addition, there are plans to translate Chinese books and textbooks into Ukrainian and publish them in Ukraine. No less important is the agreement on the exchange of students and postgraduates within the framework of the international programs of the Taras Shevchenko National University of Kyiv. In addition, during the meeting, the representatives of the Ukrainian university concluded about the necessity to borrow Chinese experience in developing a strategic plan for university development that also is an individual part of the arrangements within the context of future cooperation. The initiation of experience exchange in the scientific support of startup activities under partner universities was the last but not least discussed point. The meeting laid the foundation of fruitful cooperation with China Renmin University Press (CRUP).