Головна News In the context of international networking, members of the Executive Board of... 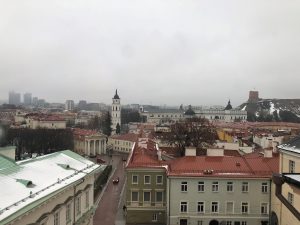 Under intergradation movement of Ukraine to the European Union, now it is important to establish strong and comprehensive cooperation with the European community including education and scientific sphere. Oleh Holovko and Mykhailo Vikhliaiev, members of the Executive Board of the Center for Ukrainian and European Scientific Cooperation, visited Baltic countries within the framework of expansion of public and scientific activities and building new international partnerships. The trip involved meeting with representatives of 11 higher education institutions, among them there were 6 universities of the Republic of Lithuania, 2 universities in Riga (the Republic of Latvia), and 3 universities in Tallinn (Estonia). During the meetings, it was discussed important issues related to different aspects of academic life and analysed strengths and weaknesses of education and science both in the Baltic countries and Ukraine. The views of the heads and representatives of the educational institutions of the Baltic States on these and many other issues will be of interest to researchers from Ukraine. Soon the details of the conversations will be available on our website as an interview in a separate section. 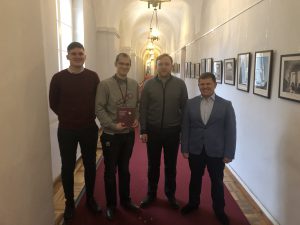 As it has been mentioned, a visit to three ex-USSR countries was scheduled: Lithuania, Latvia, and Estonia. A start point of the meetings was in the southernmost of the Baltic countries: the Republic of Lithuania, namely its capital Vilnius and its four universities. Vilnius University, the first and the largest Lithuanian university with a 400-year long history, occupied a prominent place among the universities visited by the members of the Executive Board of the Center for Ukrainian and European Scientific Cooperation. According to the national rating, Vilnius University is considered the best university in the country, one of the oldest universities in Europe, as well as one of the most prestigious universities in the world. It was impossible to come to Vilnius and not to talk with representatives of such kind of an institution of higher education. For this reason, executives of the Center made arrangements for a meeting with Julius Pukelis, International Relations Manager of Vilnius University, who gladly agreed to meet and talk with colleagues from Ukraine and discuss possible spheres of cooperation. The main topic of the conversation was the holding of joint scientific events, the publishing of scientific periodicals with the possibility of publication for Lithuanian and Ukrainian scholars. 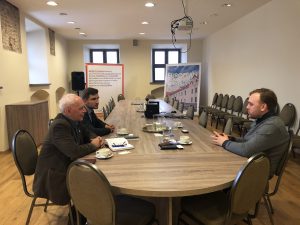 The meeting with representatives of European Humanities University: Ryhor Miniankou, Head of Academic Department of Social Sciences, and Maksimas Milta, Head of the Communications Unit, was also exciting. They told that the university was founded in 1992 in Belarus, but in 2004 it was forced to cease activities within the mentioned country due to some causes. However, due to the political, organizational, and financial support of the Lithuanian Government, the European Commission, authorities, public organizations and funds of the USA and European Union countries, EHU was able to recommence operations in Lithuania. In autumn 2005, it began to provide students from Belarus with Bachelor’s and Master’s programs. In February 2006, the Government of Lithuania granted the status of the Lithuanian University to EHU. The university is currently open for entrants from the CIS and Baltic countries. The university with such a history, which once was supported by other countries, aims to continue the good tradition to provide comprehensive support to educational institutions and foreign scholars. 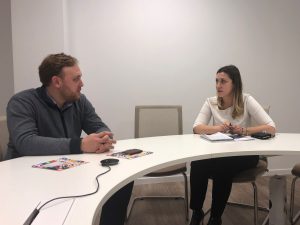 In Vilnius, the representatives of the Executive Board also visited University of Applied Sciences and University of Applied Social Sciences. In the Vilniaus kolegija / University of Applied Sciences, it took place the meeting with Nijole Zinkevičienė, Vice Rector for Research and Partnerships, Jolanta Preidienė, Head of International Relations Office, Erika Kubilienė, Head of Research Integrity Office, who showed the interest in the international cooperation in the context of joint scientific projects (scientific and pedagogical internships, international conferences etc.). University of Applied Social Sciences met first of all with its modern architecture, design and equipment. Some university buildings are constructed no longer than a year ago and have a unique original appearance. All classes are fitted out with modern equipment. It distinguishes the university from most of the country’s educational institutions and attracts a lot of attention and admiration. Diana Garlytska, Head of R&D Division, kindly met the representatives from Ukraine and gave a small tour around the campus.

The representatives of the Center also visited universities in other Lithuanian cities – Klaipėda University and Kaunas University of Technology, which are as 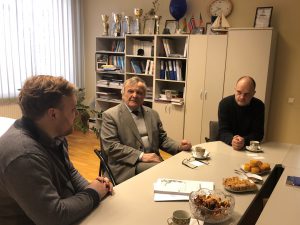 good as capital higher education institutions. In Klaipėda University, the representatives met Liutauras Kraniauskas, Member of Academic Council of the Republic of Lithuania, and Antanas Bucinskas, Counsellor of Dean of the Department of Social Sciences and Humanities, Academic Secretary of Klaipėda University Council. During the conversation, it was discussed issues related to the establishment of the National Agency for Higher Education Quality Assurance. The representatives of the Center see it interesting to adopt the best practices of Lithuania in Ukraine. Kaunas University of Technology (KTU) is a state university of Lithuania established in 1922. KTU is one of the largest technical universities in the Baltic countries engaging in studying in physics, technological and social sciences, research and development, research on biomedical sciences and humanities. KTU is experienced in the development of scientific projects in the framework of EU research and innovation programme “Horizon 2020”. In August of the current year, the university organizes summer school for future postgraduate students and invites Ukrainian young scholars to join the training process. More detailed information about summer school will be available later. Dr. Leonas 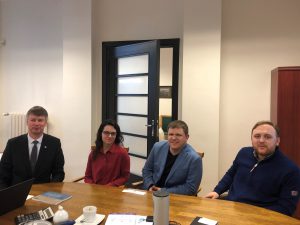 Balasevicius, Vice Rector for Research and Innovations, and Vilma Karobliene, Head of the Research Center, shared their ideas on ways for improving scientific activities both in Lithuanian and Ukraine. As a result of the meeting, it was discussed an opportunity to implement joint scientific projects of the Center for Ukrainian and European Scientific Cooperation and Kaunas University of Technology, which would involve elaborating collective monographs, conducting international conferences for Lithuanian and Ukrainian scholars etc. 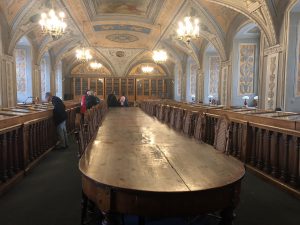 Then, it was scheduled to visit the Republic of Latvia where the members of the Executive Board had two meeting in capital universities – Riga Technical University and the University of Latvia. Riga Technical University is the oldest technical university of Latvia, which provides a full scope of technical education in engineering sciences. The meeting involved the participation of Igors Tipans, Deputy Rector, and Natalija Muracova, Head of International Cooperation and Foreign Students Department. During the meeting, the parties discussed the peculiarities of technical education in the Republic of Latvia and its relation with higher educational institutions of ex-USSR countries. The representatives of Riga Technical University shared their experience in preparing and publishing scientific periodicals, as well as presented Ukrainian colleagues scientific publications. It was an exciting meeting with a representative of the University of Latvia – Sintija Maculevica, Coordinator of International Mobility Unit, who told about peculiarities of a scientific internship of Ukrainian researchers due to the funding of the government of the Republic of Latvia. The parties gave consideration to a joint scientific internship for Latvian and Ukrainian scientists at the University of Latvia. 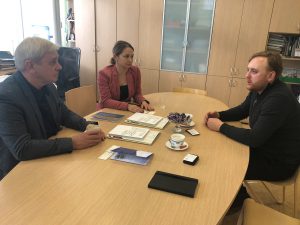 Board members visited the capital of Estonia – Tallinn. Representatives of Estonian Academy of Arts, Tallinn University, and Tallinn University of Technology gladly met the members of the Center and shared their ideas on important and relevant issues of science and education. It was incredibly interesting conversation in Estonian Academy of Arts with Anne Pikkov, Vice Rector for Academic Affairs, and Epp Lankots, Vice Rector for Research, concerning amazing education space of the academy, which was created at the premises of old Soviet socks factory, a role of designers and architectures in creating a special image of Estonia with its sophisticated style. Academy interior design attracts attention and combines factory’s aged walls and modern decorative details and elements. An incredible meeting was held with representatives of Tallinn University. Katlin Keinast, Head of International Cooperation Department, spoke about the peculiarities of the educational and scientific process at the Tallinn University of Technology, the central higher educational institution. 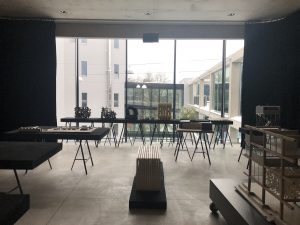 Another Tallinn university deserves special attention – Tallinn University of Technology, TALTECH. The University decided to change the old Soviet name to a more modern one, which would meet the position of the educational institution, and now it is called TALTECH. The University, as well as the country itself, seeks to diverge from Soviet standards and develop modern technologies and, consequently, buildings of Tallinn University have a modern look. This particular educational establishment can be considered a university of the future. Anna-Maria Nizovtseva, International Cooperation Coordinator, and Vlad Vernigora, Lecturer at Law Faculty of School of Business and Governance, were present at the meeting with the representatives of the Center for Ukrainian and European Scientific Cooperation and told that over the past few years Estonia, small, proud and once Soviet country, had transformed into a full-fledged digital state – e-Estonia. Estonia was the first country in the world, which introduced e-residence allowing its citizens to vote and sign any documents via the Internet. As TALTECH representatives have noted if before they borrowed experience of different countries, now everyone is studying and following their country lead. Many Ukrainian IT specialists go to Estonia to develop their own technological products. 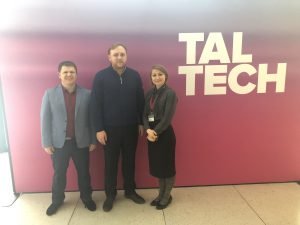 Representatives of the Baltic universities agreed upon the organization of visits for students and young scientists from Ukraine to their educational institutions. Thus, the Center for Ukrainian and European Scientific Cooperation is going to begin the preparation of a study visit to the countries and educational institutions of the Baltic States – “International study visit to the Baltic States”. Interesting scientific events are elaborated for scientists and researchers: international conferences, scientific and pedagogical internships, participation in collective monographs, a possibility of publishing in the scientific periodicals of Lithuania, Latvia, and Estonia, etc. All information on new events will be available in the section “Announcement”.