Головна News Meeting with Ambassador Extraordinary and Plenipotentiary of the Kingdom of Belgium to... 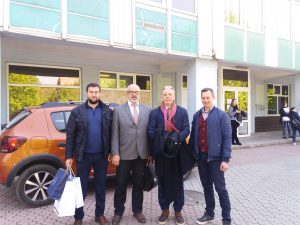 Ambassador Alex Lenaerts told his own story and shared his ambassador’s experience in different countries. He embarked upon a career of a radio journalist and consequently began to work in the Senate and the European Parliament in Brussels. In particular, Alex Lenaerts was a plenipotentiary in Bosnia and Herzegovina and worked on many diplomatic issues, including the Middle East and Syria ones. From 2014 to 2018, he was appointed Ambassador Extraordinary and Plenipotentiary of Belgium to Lebanon, and from 2018 – Ambassador Extraordinary and Plenipotentiary of Belgium to Ukraine.

Alex Lenaerts decided to work in Ukraine because today Ukraine is a new challenge for Europe. He noted that the main thing is European course chosen by Ukrainians and this is the most important for Ukraine and its professional future as Ukrainians have decided to be a part of open, free space.

During the meeting, there was a lively discussion about the current state of protection of human rights and freedoms in Ukraine and European countries. In addition, Alex Lenaerts shared experience in the functioning of the system of higher education in Belgium. It also was agreed to initiate and conduct mutual scientific and practical events that would be useful for scholars from Ukraine and Belgium.

Scientific and pedagogical internship in history,...

Scientific and pedagogical internship in culture,...