Головна News Members of the Executive Board of the Centre for Ukrainian and European... 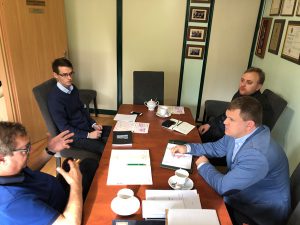 Oleh Holovko and Mykhailo Vikhliaiev, members of the Executive Board of the Center for Ukrainian and European Scientific Cooperation, had a working visit to the Polish publisher “Adam Marszałek Publishing”. The meeting was held with dr Adam Marszałek, President of “Marszałek Publishing Group”, and dr Bartosz Płotka, Secretary of VII International Asia Congress.

Within the context of the meeting, it was discussed the participation of Ukrainian scientists in VII International Asian Congress, which is scheduled on May 20 – 22, 2020, in Toruń. International Asian Congress is the most important scientific and cultural event devoted to Asia in Central Europe. It unites scientists, experts, politicians, diplomats and entrepreneurs during twelve years. Since 2017, the Congress has been accompanied by special panel groups focusing on the cooperation of science and business and presentation of the conditions for running a business in Asian countries.

Mykhailo Vikhliaiev, a member of the CUESC Executive Board, initiated the creation of an individual panel dealing with the role of Ukraine in the modern world in the context of VII International Asian Congress. About 40 scientists from Ukraine will take part in the event. Prominent scientists from Ukraine, Poland and Asia will be the moderators.

Another main outcome of the meeting was an announce about of the inclusion of the Publishing House “Helvetica”, which is headed by Oleh Holovko member of the CUESC Executive Board, into “Marszałek Publishing Group” that will contribute to the increasing the capabilities abroad in general and in Poland, in particular.