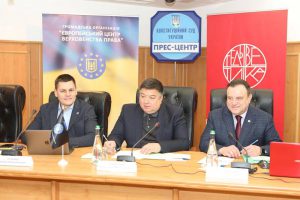 On January 22, the scientific and practical event “Innovations in the area of human rights: the international and European experience for Ukraine” was held in the Press Center of the Constitutional Court of Ukraine. Dmytro Luchenko, Doctor of Law, Head of a Non-Governmental Organisation “European Center for Rule of Law”, was a responsible organizer.

In the first part of the event, Dmytro Vovk (Head of the Center for Rule of Law and Religion Studies at Yaroslav Mudryi National Law University) made a report devoted to freedom of religion or belief and safety. He presented Ukrainian edition “EU guidelines on the promotion and protection of freedom of religion or belief”, provided ECRL with free publishing. The Center for Ukrainian and European Scientific Cooperation and Helvetica Publishing House distributed the edition.

Then, the presentation of Paulo Pinto de Albuquerque’s “Separate opinion. The way to fairness” was conducted. Oksana Kaplina, Compiling Editor, Doctor of Law, Professor, Corresponding Member of the National Academy of Legal Sciences of Ukraine, emphasized the key ideas on the protection of human rights marked by Judge Albuquerque.

Organizers and speakers of the event were as follows:

Luchenko Dmytro Valentynovych, Professor at the Department of Yaroslav Mudryi National Law University. He runs the Non-Governmental Organisation “European Center for Rule of Law”, which implements scientific, educational and academic projects in the area of rule of law and human rights.  Luchenko Dmytro Valentynovych is Head of Administrative Law Experts Association.

Vovk Dmytro Oleksandrovych, Member of OSCE/ODIHR Panel of Experts on Freedom of Religion or Belief for 2019–2020.