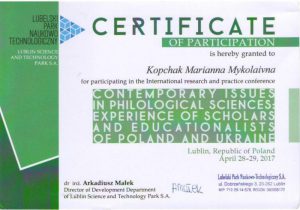 On April 28-29, 2017, the international scientific and practical conference “Actual Problems of Philological Sciences: experience of Polish and Ukrainian scholars and educators” was conducted by Lublin Science and Technology Park, which is situated in Lublin, Poland, with support of the Center for Ukrainian and European Cooperation.

Lublin Science and Technology Park was founded in 2005 to facilitate the process of sharing knowledge and technology between business people and scientists. Under the framework of the undertaken activities, LSTP promotes innovative culture, unites a scientific community, establishes cooperation between scientific departments, universities and research institutes of Poland as well as other European countries.

The collection of materials of the international scientific and practical conference published authors’ abstracts of reports on different topics in accordance with the following sections, activity of which was planned within the framework of the conference: 1) Slavic Languages; 2) Literature; 3) Romanic, Germanic and other languages; 4) Theory of Literature; 5) Comparative Literary Studies; 6) General Linguistics; 7) Comparative and Typological Linguistics; 8) Interpretation and Translation Studies; 9) Language and Mass Media; 10) Intercultural Communication. 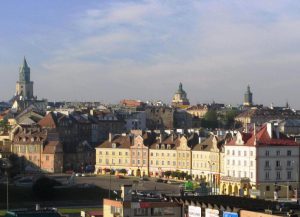 The collection contains studies that touch upon burning and urgent issues of philological science. According to the conference sections the participants considered such issues as “Abbreviations in the language of Mass media” (Boyko V.M, Davydenko L. B.), “Augustinian women’ love prose: features of a narrative organization” (Lutsenko L.O.), “Abbreviation in the modern German-speaking terminological system of gastroenterology” (Bondar N.V), “Semiotics of language a brand” (Ushchapovska I.V), “An ironical function of allusions (based on the texts of Ukrainian modern  artistic discourse)” (Petryna H.V.), “Traditional and innovative approaches to the study of Ukrainian as a foreign language in a high school” (Dmytruk L.I.), “Folk fairy tale as  informant and expresser of the national language and mental identity” (Pavlushenko O.A.), “Application of the narrative method in the study of contemporary poetic discourse” (Akishyna M.O.), “The content and borders of the concept “gender” in the modern linguistic studies” (Bondar O.Yu.), and many others.

All participants from Ukraine were provided with the collection of conference abstracts and the certificate, affixed with the seal; it is a document, confirming participation in the activity of the scientific conference (congress, symposium, and workshop) held in the EU country, according to p. 5.2, section 2 “On Order of the Procedure for Awarding of Scientific Degrees to Scientific and Academic Staff”: Order of the Ministry of Education and Science dated January 14, 2016, No. 13