On May 21, Serhii Kivalov, President of the National University “Odesa Law Academy”, met with the representatives of the greatest publishing houses of China and Poland. Oleh Holovko, Member of the Executive Board of the Center for Ukrainian and European Scientific Cooperation, Director of the Publishing House “Helvetica” arranged the meeting. The Chinese delegation was headed by Yolanda Liu, Director of China Renmin University Press. The delegation also consisted of Djiao Shanshan (Chief Editor) and Minh Epinh (Editor).

Renmin University of China is one of the best Chinese universities in law and humanities, which has the status of an elite higher education institution. The main research areas of the university are philosophy, economics and jurisprudence. In 2014, 14 disciplines of HEI were recognized best in China. The publishing house was established in 1955, and it was the first university press in the country. Today, the profit of the press exceeds one million dollars a year, and the number of annual orders for books, brochures, journals, newspapers, online publications is about five thousand. In 2017, the university press was transformed into a Publishing Alliance, which has five branches and more than one hundred enterprises around the world.

The very greatest China Press and the National University “Odesa Law Academy” concluded cooperation agreement which definitely will have long-term prospects for students and academic staff of both universities. President of Law Academy stated the conclusion of the agreement on mutual cooperation is a big step, which is important for China as well as for Ukraine and stipulates fruitful cooperation. Now publications of Odessa scholars and lecturers can be published in China and other countries of the world and vice versa, the Ukrainian scholars will have an opportunity to be familiar with papers of Chinese scholars.

“Adam Marszałek”, the largest scientific publishing house in Poland, is a credible partner of Chinese Publishing Alliance. Polish party represented by Adam Marszałek, founder of the press, took part in the negotiations in Odessa. Mr Marszałek said that the publishing house was founded in 1990 in Torun – the birthplace of Nicolaus Copernicus, great astronomer of the Renaissance. According to many indicators, the publishing house “Adam Marszałek” is ranked first in the general Polish ratings of scientific publishers. As Adam Marszałek, Director General of the Publishing House, said in the negotiations, it publishes books on history, economics, pedagogy, international relations, political science, philology disciplines. “Adam Marszałek” publishes books in foreign languages – English, German, French, Russian, Italian, for readers who love outside Poland.  Among its partners are academic institutions and authors from leading Polish and foreign scientific centers (USA, Canada, Russia, Germany, France, China and other countries). The fact that its two journals are part of Scopus shows the significance of the publishing house.

Serhii Kivalov and Adam Marszałek held a conversation and discussed the possibility of conclusion of a similar agreement in the near future. The head of the publishing house was very pleased with the meeting: 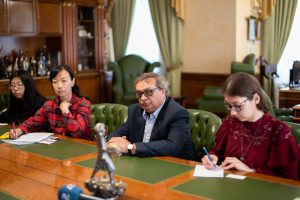 We had a fruitful meeting with the President of the National University “Odesa Law Academy” Serhii Kivalov. That is what I like: in brief, in concrete terms and effectively. We would like to expand cooperation and publish books and brochures in Odessa. Mr. President is also interested in our cooperation. We would like your scholars of different specializations, especially legal disciplines, to publish their papers in our prestigious publishing houses. This is profitable not only for science, information but also for business. An agreement with the Chinese Publishing Alliance has already been signed. I hope this year we will sign our cooperation agreement. Your students will have the opportunity not only to read and listen but also to share the experience. We have an exchange program for students from different universities. We called it internationalization. And scientists will be able to work not only in a small environment in their homeland but also to share ideas and make themselves known in the world.

After signing the memorandum, the participants of the meeting exchanged valuable gifts. Serhii Kivalov presented memorable medals depicting the University, which were produced by the National Bank of Ukraine, and unique editions of English Legal Dictionary elaborated on the basis of his activity at the Venice Commission, the practice of the European Union for Human Rights, the European Court of Justice to foreign guests.

In the context of the visit of the representatives of the Chinese Publishing Alliance to Odessa, it was also signed an agreement with Publishing House “Helvetica”, which is a long-standing, reliable partner of the Center for Ukrainian and European Scientific Cooperation and Uzhhorod National University.