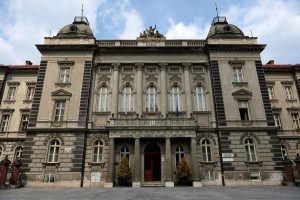 The University provides education in three university cycles: bachelor, master and PhD. The process of education is performed in Slovak and English. Pavol Jozef Šafárik University in Košice provides higher education on the basis of the latest scientific researches in a broad international context. The University intensively cooperates with education institutions around the world.

The first joint event, in the context of cooperation between Pavol Jozef Šafárik University and the Center for Ukrainian-European Cooperation, was the organization and implementation of International academic conference. When discussing the details of scheduled event, many different relevant topics of the conference were proposed, however, one that seemed to the organizers to be the most urgent was chosen by joint endeavours. As a result, On February 27-28, 2015, International conference “Juridical science and practice in the third millennium” was held.

The following sections were in the framework of conference:

About 400 Ukrainian scholars showed an interest to participate in the conference and presented achievements on a specific topic in the form of theses. The amount of participants proved that the organizers chose a relevant topic for the event. Upon completion of the conference, all participants received a collection of abstracts and certificate that confirms participation in the event.