Key features of the Education System

Since the political transformation (the collapse of the communist regime) in 1989, the Polish education system has undergone profound changes in nearly all of its aspects including the structure, organization, management and the core curriculum. As a result it has developed some specific features which can be described as follows:

Educational reform in Poland is being implemented since the beginning of 2017. Its main goal is to offer students a solid background of general education required for further personal development and the needs of contemporary labour market.

The key elements of the reform are as follows:

The reform will be implemented between 1 September 2017 and the school year 2022/23. On the 1 September 2017 pupils graduating from year 6 of the primary school become pupils of grade 7. At the same time gimnazja (lower secondary schools) will be gradually phased out. In the school year 2018/19 gimnazja will cease to operate as the last cohort of pupils will graduate.

In the following text we refer to two different structures of the school education system (old and new which was initiated in September 2017).

Stages of the Education System

Attending a crèche is not obligatory, crèches are not a part of education system as they are supervised by the Ministry of Family, Labour and Social Policy.

Pre-schools are optional for 3, 4 and 5-year- old children and obligatory for 6-year-olds. Every 3-, 4- and 5-year old has an entitlement to a place in a pre-primary setting.

As of the school year 2016/17 compulsory education in grade one of primary school starts at the age of 7. Parents of 6-year olds have a choice – they can enroll their children in the first grade of primary school or keep them in a pre-school institution.

6-year primary school (szkoła podstawowa) was compulsory for all pupils who are usually aged 6/7-13.

A compulsory external exam at the end of grade 6 of primary education is cancelled due to the introduction of the new structure.

8-year primary school (single structure education) is compulsory for all pupils who are usually aged 6/7-15.

At the end of grade 8 of primary school pupils will take a compulsory external exam and its results will influence admission to secondary schools.

Starting in 2017 the 3-year gimnazjum (lower secondary school) is being phased out. Pupils graduating from the 6th grade of primary school become pupils of grade 7 in a new 8-year primary school.

Although this stage of education is not compulsory (or in fact compulsory part time up to the age of 18) a vast majority of students continues education in upper secondary schools.

In the old structure there are three types of upper secondary schools:

The level of lower secondary school (ISCED 2) will be included in a single structure called an 8-year primary school.

Post-secondary schools will continue their functioning within the new structure of school education.

There are two types of Higher Education Institutions:

Holders of the Bachelor’s degree can enter second-cycle programmes, which take 1.5-2 years depending on the area of study.

The Master’s degree (magister or its equivalent) entitles its holder to practice a given profession and provides access to third-cycle studies. They are organised in HEIs or research and development institutions other than HEIs and last for 3-4 years.

Adult education is open to adults who wish to complete school education on primary and secondary level or acquire new vocational qualifications and skills for professional or personal reasons.

It is organised, in school and non-school settings, by:

Training is offered also to the unemployed and to certain categories of people searching for a job.

Further information may be found in particular chapters as well as on the websites:

Structure of the National Education System 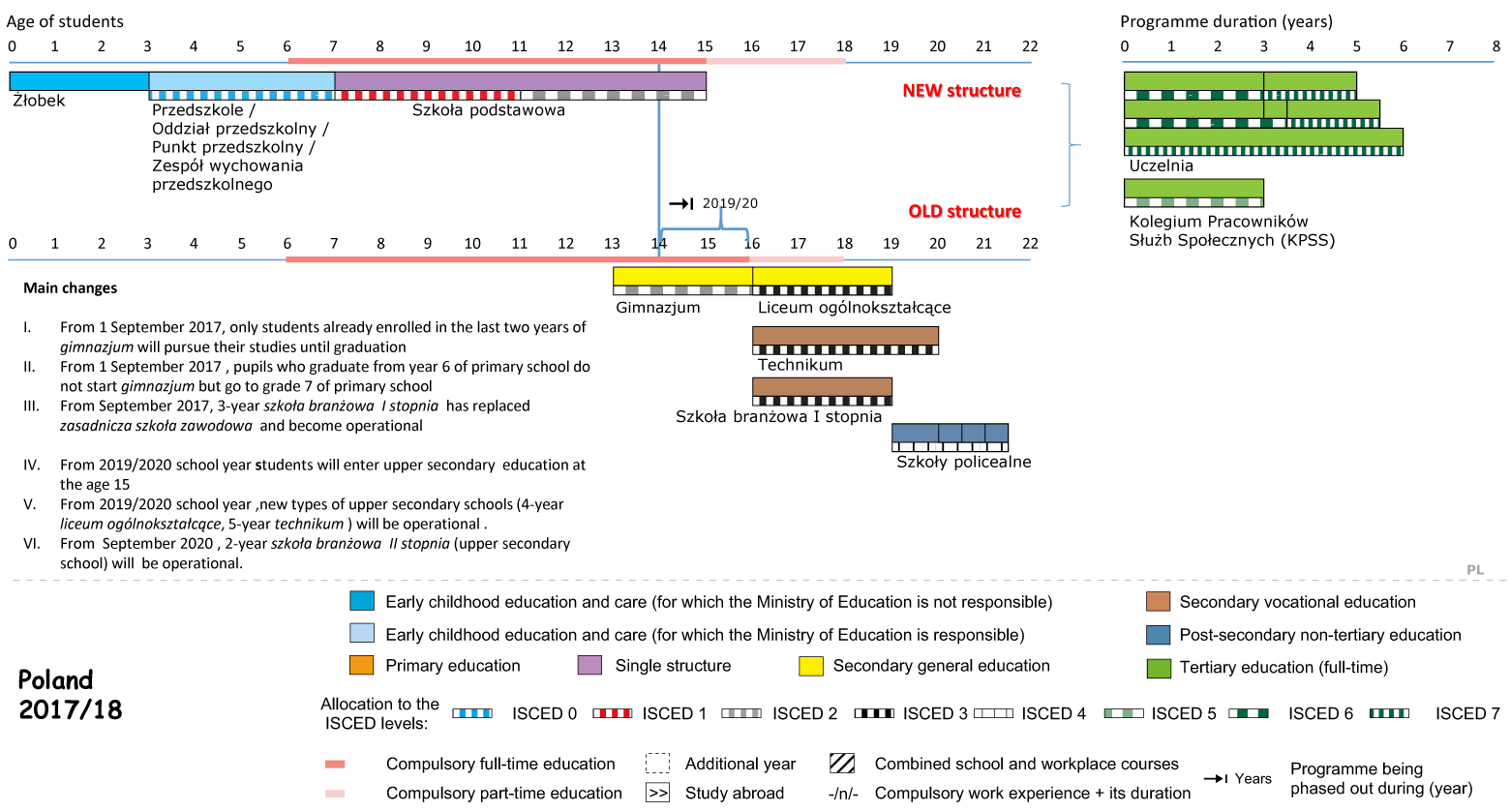