Головна News Members of the Executive Board of the CUESC were guests of the... 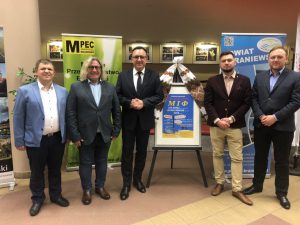 Oleh Holovko and Mykhailo Vikhliaiev, members of the Executive Board of the Center for Ukrainian and European Scientific Cooperation, visited Ukrainian-Polish festival Ukraińskie Barwy Pogranicza (Ukrainian Borderland Colours)  which took place on October 18–19 in Braniewo (the Republic of Poland). The participation of the members of the CUESC Executive Board opened up new contacts and opportunities for cooperation.

“Ukraińskie Barwy Pogranicza” is a festival conducted every year since 2015 in Braniewo (Warmian-Masurian Voivodeship) in the Cultural Center in Braniewo. Within the framework of the festival, there are concerts, performances, screenings and a party to Ukrainian-Polish music. The event has additional funding from Braniewo County. This year the festival hosts Ave Maria (Ivano-Frankivsk, Ukraine), Leonida Bedrunia (Kovel, Ukraine), Sova (Gdańsk, Poland).

During the visit of the festival, Oleh Holovko and Mykhailo Vikhliaiev, members of the Executive Board of the Center for Ukrainian and European Scientific Cooperation, had a great opportunity to communicate with Director of the Polish publishing house “Bookmarked Publishing & Editing” Kamil Sygidus, Mayor of Braniewo (Braniewo County, Warmian-Masurian Voivodeship) Tomasz Sielicki and Mayor of Miłakowo (Ostróda County, Warmian-Masurian Voivodeship) Krzysztof Szulborski. As a result, they agreed on the future cooperation. Thus, it is planned a joint organization of winter and summer schools for academic staff and  postgraduate students of Ukrainian higher education institutions in Warmian-Masurian Voivodeship, which combine three focus areas – science, business and politics. Moreover, in May 2020, it is scheduled holding a forum tentatively entitled “Intermarium”. More detailed information on new focuses and international projects of the Center for Ukrainian and European Scientific Cooperation will be available later in “Announces”.