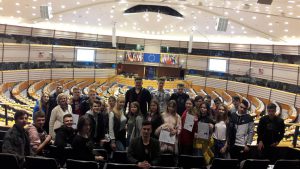 One of the directions of activities of the Center for Ukrainian-European Scientific Cooperation is also the implementation of student visits to international organizations thanks to which students have the opportunity to participate in discussions with officials of international bodies and the best European HEIs of Law.

With the support of the Center within the framework of the project “INSTITUTIONS STUDY VISIT-2018”, an educational visit to the countries of Europe was organized for students of the College of Finance and Law (Kyiv, Ukraine) which took place in April 19-30, 2018. During 12 days the group attended 7 European countries and more than 10 international institutions.

On April 19, students left from Lviv to the first country planned for the trip – Poland. On April 20, the group arrived in the city of Wroclaw, which has one of the oldest universities in Central and Eastern Europe with a rich history of over 300 years – the University of Wroclaw. Students visited the university, listened to a small lecture on studying in European HEI, its formation and development. 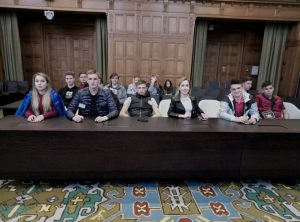 Having visited the German capital, on April 23 the group arrived in the charming city of Hamburg and immediately went to the International Tribunal for the Law of the Sea, an independent international judicial institution for settling disputes related to the application and interpretation of the UN Convention on the  Law of the Sea of 1982. Students had a wonderful opportunity to get acquainted with the history, jurisprudence and affairs of the Tribunal as well as to visit an exciting excursion to its premises.

Arrived on April 24 at The Hague, Dutch city, students were expected to visit the International Court of Justice, one of the six principal bodies of the United Nations and the main judicial body of this organization. With the assistance of the Center for Ukrainian-European Scientific Cooperation, a presentation on the history and activities of the International Court of Justice was prepared for the group.

After blossoming Holland, the group of students from College of Finance and Law moved to Belgium. In the morning, on April 25 students arrived in the city of Brussels and immediately headed to the European Parliament, which is located on the Luxembourg Square. The Center for Ukrainian-European Scientific Cooperation had agreed on a small excursion for the group with the representatives of the Parliament, through which they learned about the functioning of the European Parliament and what it does for citizens of the European Union, familiarized with the tasks and activities of the Parliament in Strasbourg and Brussels, looked around the territory and buildings of one of the most influential legislative bodies in the world. In addition to the excursion, it was prepared an expedition to the Parliamentarium, a genuine interactive center that places many multimedia displays, interactive screens and devices which allows you to see the work of the European Parliament in detail.

When planning a trip to European countries, the organizers of the tour “INNTERNATIONAL INSTITUTIONS STUDY VISIT – 2018” could not miss a beautiful France, so on April 26-27 students of College of Finance and Law enjoyed the magnificent views of Paris. The excursion accompanied by French tour guide was performed for students for a better understanding of history and traditions of Paris.

Austria and Slovakia were the last countries in the schedule of the educational euro tour, but they were not less interesting and attractive. On April 28 the participants of the tour came to Vienna, Austrian capital, one of the largest megalopolis in Europe, which has thousand-year history. The capital of Austria became the cultural capital of Europe thanks to the art galleries, concert halls and the world-renowned Vienna Opera. Walking around the city with a stunning historical and cultural heritage, students of College of Finance and Law were incredibly impressed with beautiful city landscapes and monuments.

The small but very cozy capital of Slovakia, Bratislava, met students in all its glory. A large number of fortresses, caves, parks, proximity to the mountains and UNESCO monuments with centuries-old history were waiting for the group in this magnificent city. Walking around ancient streets a whole day, they came to the conclusion that this city really enchants by its uniqueness and inherent elegance. Enjoyed such end of the trip in full our students took the road, and on April 30 they were met by warm Lviv with all its love.

The Center for Ukrainian-European Cooperation assured that this is not the last trip and that they plan to continue to organize and support similar student study trips. All participants of the tour received souvenirs in memory of the study visit to Europe from the Center.